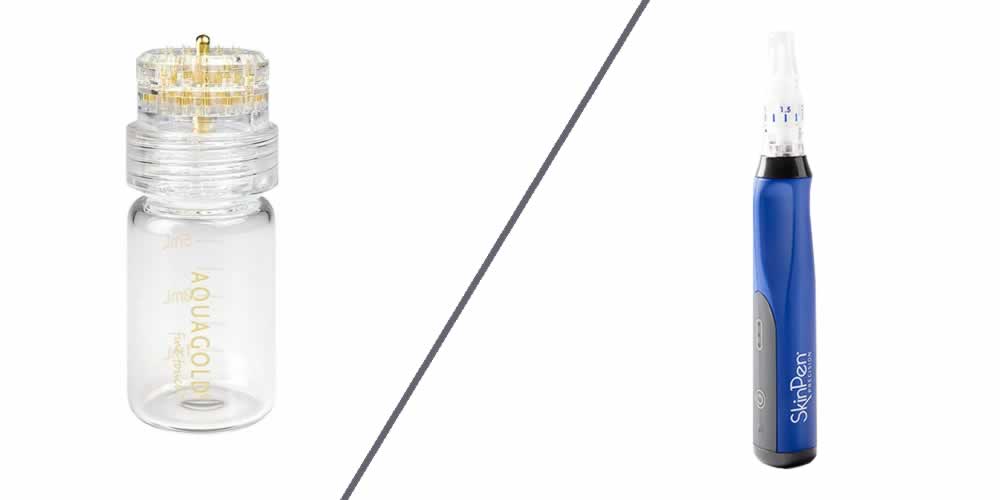 Dr. Elizabeth Roche talks about microneedling and its effects on the skin, and she discusses two different microneedling treatments, SkinPen and Aquagold Fine Touch, including the similarities and differences, what each does, and the typical ways that each is used.

Elizabeth Roche: Hi, John. Thanks for having me.

John: Sure. Why don’t we start at the beginning, Elizabeth, and maybe you could just tell us a little bit about microneedling and what that is.

Elizabeth: Microneedling is a procedure that’s been around for many, many years and it’s changed over the past several decades. The basic premise of it is that we take little needles and we’re creating tiny little injuries in the skin or little puncture wounds, and the skin responds by healing. And when we are healing, our skin creates new collagen. And in the past several decades, the microneedling devices have gone from at-home roller devices to more medical-grade devices. And we carry two different types of microneedling. One is SkinPen and the other is Aquagold Fine Touch.

John: Okay, and you mentioned that there are at-home devices as well. How do those types of devices differ from the type of microneedling devices that you use at your office?

Elizabeth: Well, because we have the medical-grade types, our needles are deeper, so the at-home devices may not penetrate as deep as the devices we have. We go down to the…could be the epidermal/dermal junction or even down to the dermal junction. The SkinPen is a more aggressive treatment and we can actually dial in the depth that we want these needles to go down to. And you have to be really careful too because certain areas of the skin can’t take as aggressive a treatment, so you have to know where to treat more superficially, and where to treat deeper. And the at-home treatments just don’t penetrate down as far. You’ll be getting a greater response and a better result when you have a procedure done in the office as compared to at home.

John: Okay, and you said that there’s two different types of devices that you use at your office. One is called SkinPen and the other is Aquagold. What are the differences between those?

Elizabeth: SkinPen, it’s a more aggressive treatment. It is the only FDA-approved or FDA-cleared device for microneedling to help with facial acne scars. It’s a really powerful form of microneedling. The SkinPen creates these controlled micro injuries in the skin and that stimulates the body’s natural wound healing process, but it also minimizes the cellular damage. And the result is a remodeling of the scar tissue while keeping the overall structure of the skin.

You go through several phases of healing. Initially, you’ll leave looking like…having blood on your face, perhaps little red holes, but that recovery process is pretty quick. You leave looking like you have a really, really bad sunburn; and within 24 hours, those holes close up. And you may look a little pink the next day, but you can cover it with makeup. And then the third and fourth day, you really can’t tell that you had anything done. So that is a more aggressive treatment as compared to the Aquagold Fine Touch.

Aquagold Fine Touch has these small 24-karat, gold-plated microneedles and they’re attached to this tiny little jar. In the jar, we’re usually putting in different cocktails and the Aquagold Fine Touch has a spring load component and we’re just gently, lightly pressing these needles into the skin and these go down only to the epidermal/dermal junction. The depth of that is about 600 microns and the recovery time is very quick. In about four hours, that pink that you would have with the Aquagold Fine Touch procedure is pretty much resolved and you can put makeup on after four to six hours. That’s the difference. One is a little more aggressive and a deeper treatment to help with aging and scars, and the other is a lighter treatment.

John: And so people would use that for what? Just a little refresher on their face, to make their face and their skin look a little little younger, a little fresher?

Elizabeth: Exactly. It’s a great treatment to give a nice glow to the skin. It does the same as the SkinPen in that it stimulates collagen, but it’s not doing it to the same degree. Many people will get this done a day before, or a couple of days before, an event. And what we do, we make up these cocktails and the cocktails can be basic hyaluronic serum. We make cocktails that have a little bit of the hyaluronic filler with a little bit of Botox and we can put vitamin B12 in it, and that gives a nice glow and refreshing look and a plumpness to the skin. Initially when you heal, you look good, but that effect can last two to three months. So with either Aquagold or SkinPen, we can use these cocktails for either procedure. And patients, just their skin is just glowing from it.

Elizabeth: Exactly. That’s exactly how it works. We’re creating these little channels, so it leaves a pathway for the products or the medications that we’re applying to enter into skin. It just gets incorporated into that top skin layer and it will stay there for several months.

John: I’ve heard of something else called a vampire facial and also PRP. Can you describe those and how they’re related to microneedling?

Elizabeth: Sure. Sometimes instead of using one of our cocktails or basic hyaluronic serum, we’ll use a patient’s platelet-rich plasma or PRP. What we do is we have the patient come in beforehand and we draw blood. We take the test tube and spin it and we separate the red blood cells from the platelet-rich plasma. We use that platelet-rich plasma and we’re drizzling it over the patient’s face as we would one of the cocktails, and it’s penetrating into the wounds or the little channels we’re creating. And what’s in the plasma are cells that really quickly heal and stimulate new collagen so you get an even more profound result and a quicker recovery time when we use the PRP.

John: A lot of people are afraid of going to the doctor and getting a shot with a needle. They might be afraid of needles or something like that. This sounds kind of like it would be painful where you’re putting hundreds of these little needle marks all over your face. Describe the procedure a little bit more and is that something that people need to be concerned about if they’re afraid of needles?

What If I’m Afraid of Needles?

Elizabeth: Yeah, you don’t see the needles. First of all, the device looks like an electric toothbrush, the SkinPen device. And the Aquagold looks like a little glass jar. But we do encourage patients to put on numbing cream, especially for the SkinPen procedure. They’ll put on numbing cream at home a good half hour beforehand. When they come in, we clean that off. We make sure the skin is very clean. We don’t want any bacteria on it. We want them to come in without any makeup on. And with this sensation actually, at first you might feel it as little needle sticks, but it actually feels like vibration. It feels like something’s vibrating on your skin, so you’re not really feeling pinpricks.

Elizabeth: And when I get it done, I actually find it very relaxing because it’s like a vibration sensation. There may be some areas like maybe the forehead or on the nose that are a little bit more sensitive. But when we reach those areas, we’re dialing back the depth of the needle so it’s not that uncomfortable. And that’s the beauty of the SkinPen too, that if someone has a lot of wrinkles around their upper lip or around their eyes, you can do a little more aggressive treatment there and really get down and help with those wrinkles of the area.

But it’s not a painful procedure. You don’t see needles at the end. Sometimes with the SkinPen, you may have a little bit of redness in the area that we did deeper, maybe a little blood on the surface, but most patients can walk out of the office and not be startling or scary when they’re leaving.

John: Right. You said it just kind of looks like you have a sunburn or something.

Elizabeth: Yes. It looks very red like a sunburn, and that’s just the SkinPen. The Aquagold, when we do the fine touch microneedling, some people get off the table and they’re barely pink. So that’s a really great treatment if you want very little downtime, but you want the benefits of microneedling.

John: Do you find that some people, especially with the SkinPen, that maybe they’ll come in on a Friday and then they have the weekend to recover? Or how do people kind of plan for that?

When to Have a Microneedling Treatment

Elizabeth: Yes, that’s a very popular time, to do a Friday. Really, they only need like 24 hours to have the significant downtime and then after that they can put on a tinted sunscreen or makeup. But after one day, usually most of the redness is pretty much gone. But I always tell patients, “just plan a couple of days of downtime”, so the weekend is a great time to recover.

John: Are there any concerns that a patient might have when they’re deciding on where to go for their treatments?

Where to Have a Microneedling Treatment

Elizabeth: Oh, yes. Because we’re dealing with blood, we’re using needles that are going into the face, you want to make sure you’re in a place that is going to use sterile tips, sterile techniques.

You hear horror stories of places where, to save some money, they’re reusing these tips from one patient to the next. And there’s blood-borne diseases, and so you want to make sure you’re getting this treatment done at a reputable place and not somewhere where they’re cutting corners or doing something that can curtail the safety of the treatment.

John: Right. Any final thoughts on microneedling and the benefits that it can have for a patient?

Elizabeth: Yeah. I think depending on where you’re starting, what your skin looks like, sometimes we find patients can benefit from a few treatments of SkinPen to get that more aggressive treatment in, and then they maintain with the Aquagold Fine Touch. To really get some changes, some real remodeling of that collagen, they may do a couple of SkinPen treatments and then when they want that glamorous glow and nice fresh look to their skin, they can do the Aquagold Fine Touch.

John: All right, well, that’s great advice and great information, Elizabeth. Thanks again for speaking with me today.

John: And for more information about microneedling or other treatments, visit the website at elizabethrochemedspa.com or call (201) 505-1020.

5 Microneedling Secrets to Know Before Your Procedure

What Your Esthetician Wants You to Know About Microneedling