LATISSE® is an FDA-approved eyelash growth treatment for hypotrichosis of the eyelashes that can help you grow natural lashes faster. Whether you want to add length and volume to your lashes or regrow lashes that have fallen or been pulled out, LATISSE® offers a solution.
The Elizabeth Roche, MD MedSpa is excited to offer this treatment in addition to other aesthetic treatments for the eye area, such as dermal fillers, Botox, and more. Read about LATISSE® below and schedule an appointment for a consultation with me to find out if LATISSE® is right for you.

LATISSE® (bimatoprost ophthalmic solution 0.03%) initially entered the market as a treatment for glaucoma under the brand name LUMIGAN® by Allergan. When administered as an eye drop to reduce intraocular pressure, both doctors and patients noticed a surprising and not entirely unwanted result: thicker, fuller, and longer eyelashes.

Studies were soon underway and scientists developed a serum-style formulation that could be applied directly to the eyelids and eyelashes for optimal results. Patients without glaucoma can now enjoy the natural lash growth that was once only available to those being treated with LUMIGAN®. 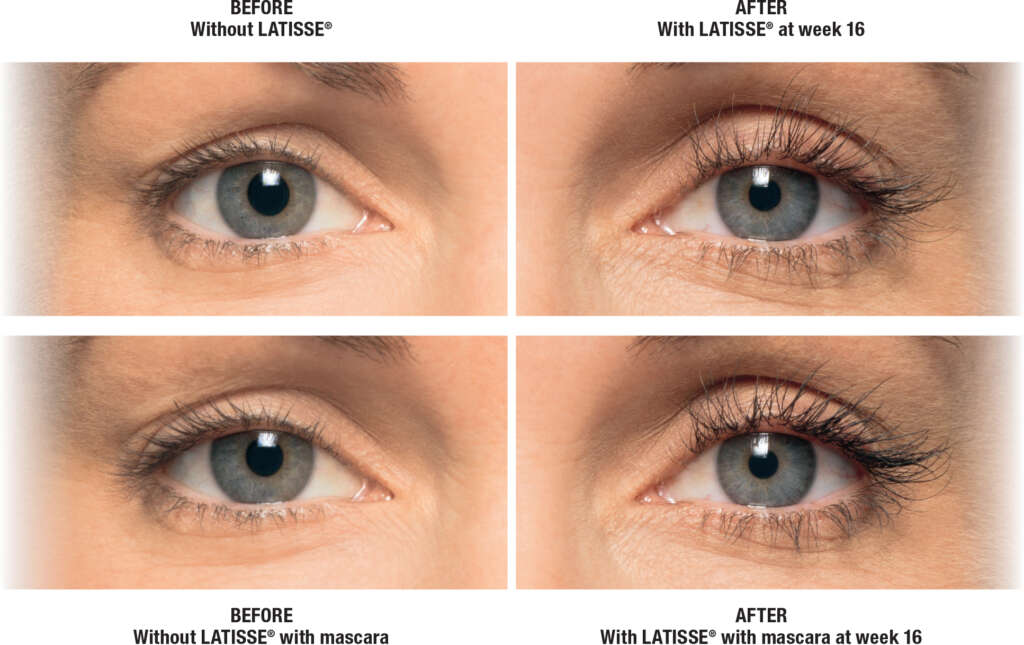 LATISSE® is generally well tolerated by most patients. Some side effects of this treatment may include the following:

Typically these side effects are mild, unbothersome, and resolve on their own throughout the course of treatment or once treatment has been completed.

Some patients should not use LATISSE®. Ask your doctor about treatment with LATISSE® if:

Can I use LATISSE® on my lower lashes too?

No. This is not recommended as it may cause excess hair growth under the lower lid as the serum is transferred from your eyelids to your cheeks and under eye area. The serum is applied only to the top lid at the lash line at night for best results. Excess should be blotted immediately and the serum allowed to dry for several minutes before going to sleep.

How long will it take before I notice results?

Because LATISSE® stimulates your body to generate more of its own natural hair, you may not notice results for a few weeks or even 1-2 months after beginning treatment. Many of my patients like the gradual filling-in of their lashes over time because it gives a more naturally-achieved appearance versus false lashes or extensions, which create an immediate and dramatic difference.

What happens when I complete treatment with LATISSE®?

Results with LATISSE® are not permanent. If you discontinue use, your lashes will eventually return to their pre-treatment appearance and volume over time. Many patients choose to cycle LATISSE® treatments so they are not constantly using the medication but still maintain the thick, beautiful lashes they want.

Book Your Consultation At the Elizabeth Roche, MD MedSpa

The Elizabeth Roche, MD MedSpa is thrilled to provide LATISSE® consultations and treatment for our valued patients who want to enhance the apperance of their natural eyelashes without having to wear eyelash extensions or false eyelashes.

Contact my office now to learn how you can get thicker, longer, fuller, and darker lashes in just a few weeks or to make an appointment for a treatment consultation. Call now by dialing 201-505-1020.